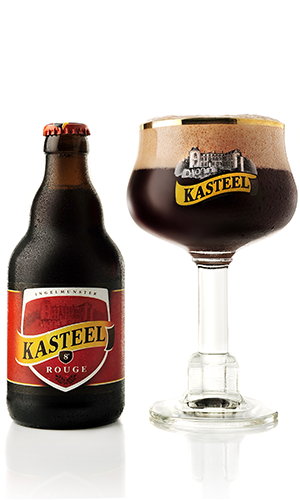 Kasteel Rouge is based on our Kasteel Donker. This fruity beer makes a great aperitif on a sunny terrace. It’s certainly a beer for lovers of sweet cherries with an intense aroma of the fruit. The cherries get the better of the malt in the Kasteel Donker mother beer, although it contributes touches of chocolate and pepper to remind you it’s there. It is surprisingly easily digestible for quite a strong beer. 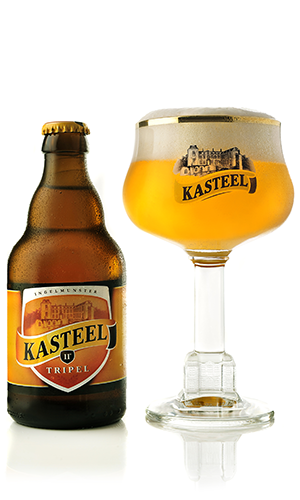 This tripel is a strong blonde beer in which both the bitterness and the fruitiness of the hops make their presence felt. The recipe has recently been changed to include a higher proportion of aroma hops. It has a subtle aroma with touches of fruit and impressions of malt, cloves and flowers. The main taste is of fruit. It is a balanced beer that is never too bitter.  The alcohol comes to the fore in the finish. The Kasteel Tripel is the mother beer for the exclusive Trignac that is matured in brandy barrels.

Kasteel Donker is a member of the Belgian quadrupel family. These are strong, sweet to bitter, dark brown beers where the malt predominates. They were inspired by the beers of the Trappist brewers. It is a full-mouthed, malty beer with touches of caramel, coffee and chocolate coming from the roast malt. The sweet initial taste is quite surprising. Further tasting shows this beer to be intriguingly complex. 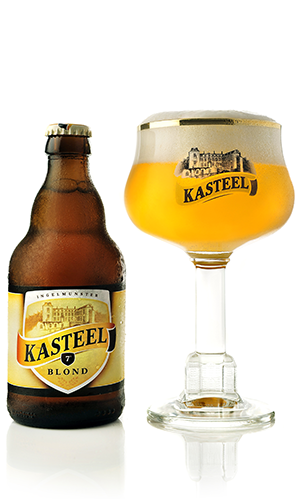 Kasteel Blond fits into the rich tradition of Belgian blonde beers with its predominantly fruity aroma and a beautiful balance between hops and malts in the glass. This beer makes for an excellent thirst-quencher, however, it also has enough complexity to make it a degustation beer full of character. Kasteel Blond is beautifully balanced, with malty aromas complemented by hints of fruit from the yeast. The initial taste is slightly sweet with added fruitiness and hop bitters. The finish is mild. 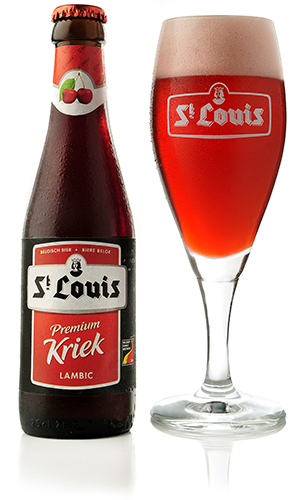 St-Louis Premium Kriek is a kriekenbier, or cherry beer, made on a lambic base. A quarter of St-Louis Premium Kriek is the juice of Oblacinska cherries that have been steeped in gueuze for six months. It also has a smaller proportion of St-Louis Kriek Fond Tradition. This beer is a thirst-quencher with a low alcohol content and, in the nose, overwhelmingly sweet aromas of cherries. It’s very fruity with a hint of sourness and slight touches of almond coming from the cherry stones. 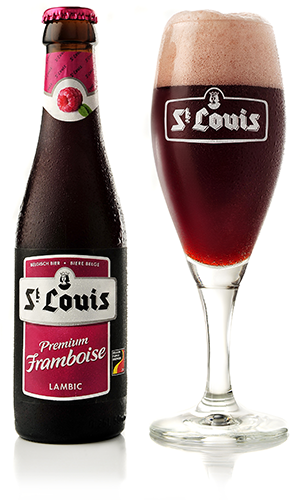 St-Louis Premium Framboise is a frambozenbier, or raspberry beer, based on a lambic. St-Louis Premium Framboise contains 25% juice from Willamette raspberries with their pure, natural sugars. It is a thirst-quencher with a low alcohol content. It’s a very fruity beer with a beautiful balance between the sweet taste of the raspberries and the slightly sour taste of the lambic. 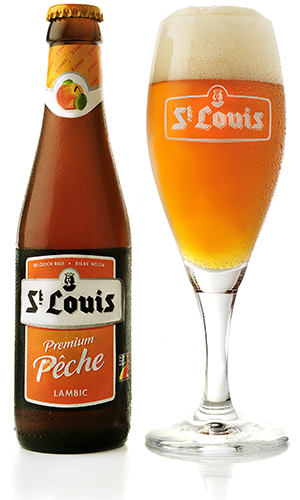 St-Louis Premium Pêche is a peach beer made on a lambic base complemented with peach juice with all its natural sugars. It is a thirst-quencher with a low alcohol content. The sweet taste of peaches dominates this very fruity beer while the finish vibrates with the slightly sour touch of the mother beer. 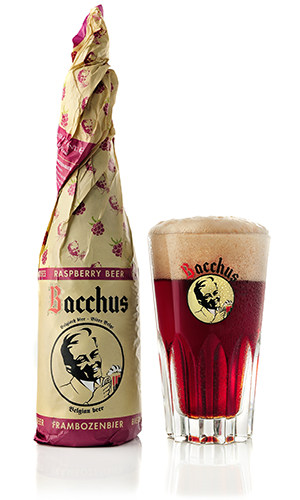 This frambozenbier, or raspberry beer, is brewed using Bacchus Oud Bruin which sets it apart from most raspberry beers that are based on lambic or geuze. The standout characteristic of this beer is its beautiful balance between sour and sweet with aromas of very sweet raspberries, malt and earthy yeast. Bacchus Frambozenbier is mild and slightly sour with hints of balsamic vinegar. It sparkles on the tongue and has plenty of body. The roast malt contributes a slight touch of caramel. The finish is dominated by sweet raspberries and a mild sourness. 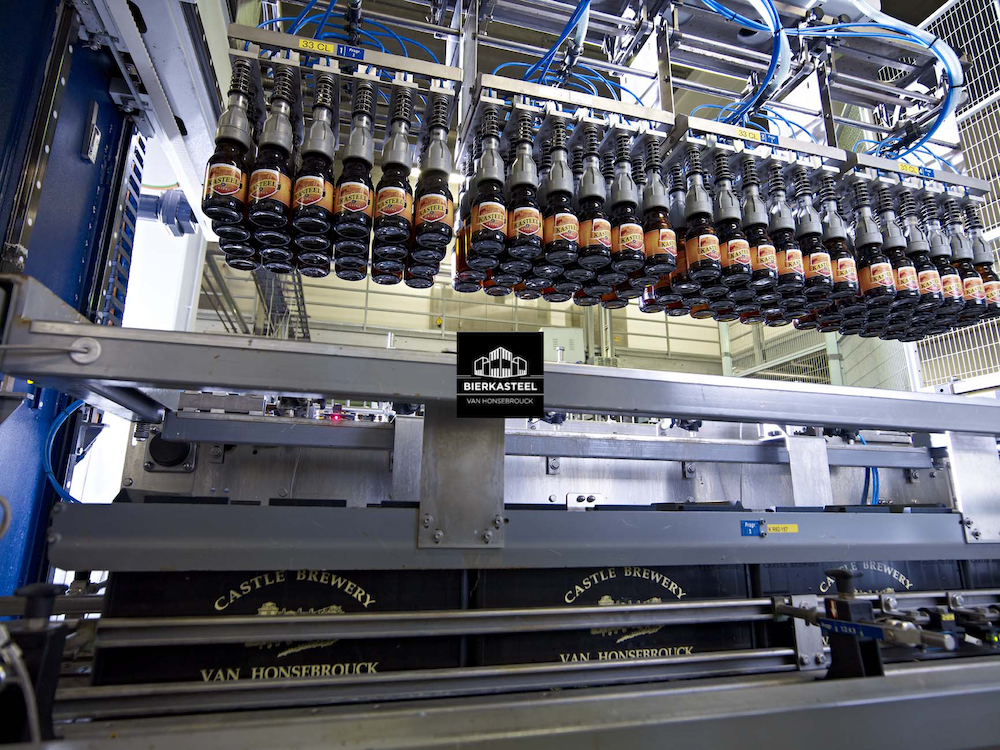 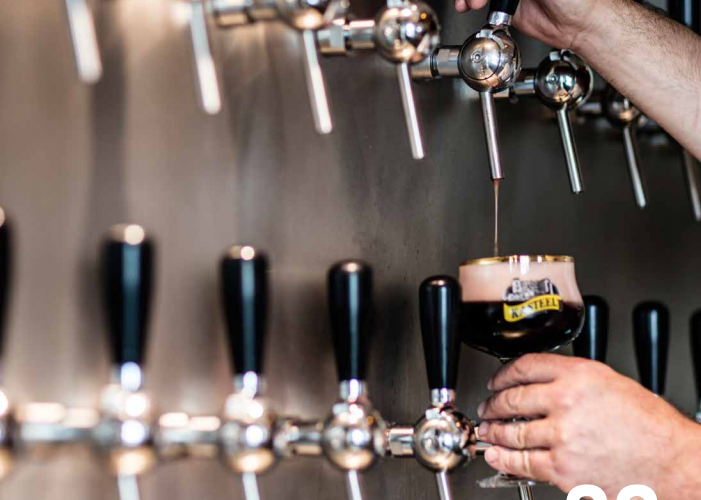 Van Honsebrouck Brewery is making a name for itself thanks to its Kasteel Beers. The label is adorned with an image of Ingelmunster Castle.

Van Honsebrouck Brewery has been active in Ingelmunster since 1900. Under the guidance of Luc Van Honsebrouck , father of the current CEO, Xavier Vanhonsebrouck, the brewery turned its focus towards producing special beers.
This initially concerned typical regional beers from the region around Izegem.

The Brigand triple was marketed in 1980. Kasteelbier was launched in the late 1980s. Throughout the years, the range has expanded to include Kasteel Donker, Blond and Tripel, plus the extra- hoppy Kasteel Hoppy, and Kasteel Rouge, which is a blend of Kasteel Donker and the cherry liqueur used in the patisserie sector.

Xavier Vanhonsebrouck took over the brewery in 2010. Xavier resolutely aims for innovation and diversification. These days it is Xavier himself who welcomes the guests, makes a pot of coffee and pours the beer.

“Do you know what the numbers 7 – 4 – 2 stand for?” Xavier asks. “I am the seventh brewer in the Van Honsebrouck family, the fourth to wield the mashing stick and the second one who only produces speciality beers.”